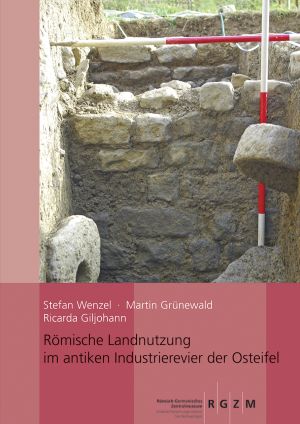 From the beginning of the Roman Imperial period, the area between Mayen on the edge of the Eifel and Andernach on the Rhine experienced an enormous increase in its economic activity. In a short time, an industrial area developed there, from which wide areas in the Roman north-western provinces were supplied with high-quality basalt lava millstones, light tuff and later also heat-resistant ceramics. Quarries were newly established, land and water routes were expanded, existing outlets were extended and others were still to be developed. Setbacks in the 3rd and 4th centuries were followed by further booms.

How could the numerous workers and their families be fed, and what consequences did the success of the stone and energy-intensive pottery industries have for the environment? In order to clarify this, two Roman villas on the northern edge of the Mayen millstone quarries were investigated with geophysical measurements, excavations, geoarchaeological and botanical studies, and their entire surroundings were explored. The results are presented in this book. The inhabitants of the villa Mendig, »Im Winkel« were themselves involved in the production of millstones. In late antiquity, a surface drainage system there probably kept a transhipment point for millstones on the Segbach dry, while a fortified storage building ensured the supply of the quarrymen. Quarry owners resided in the villa Mendig, »Lungenkärchen«. It turned out to be an axial courtyard with an impressive water basin. Inspections led to the discovery of the burial ground belonging to »Lungenkärchen« with monuments made of Lorraine limestone as well as the discovery of a previously unknown vicus »Im Terl«.