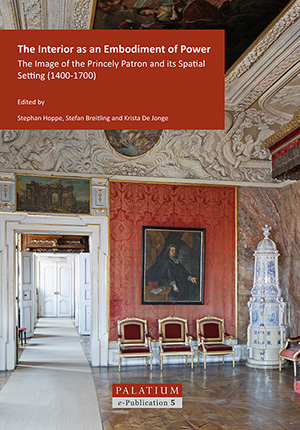 Titelei
Contents
Preface
Introduction
Between Place and Function
Ceremonial ‘Grey Areas’
Furnishing the Dukes with a Royal Reputation
Hospitality and Splendour
Holbein’s Whitehall Mural for Henry VIII
Mary Stuart’s Inner Chamber at Holyrood
The Court of the Sun God Revisited
Aristocratic Interiors of the Kaisersaal Type from the Mid-seventeenth Century in the Kingdom of Hungary
Vienna, Prague, Paris and Augsburg
The Model of a Régence Palace Interior
List of Contributors
Summe

The Interior as an Embodiment of Power

Inhaltsverzeichnis
PDF
Titelei
Contents
Krista De Jonge
Preface
Stephan Hoppe, Krista De Jonge, Stefan Breitling
Introduction
Annamaria Ersek
Between Place and Function
Notes on the Portrait Galleries in Charles IV’s Residences of Karlstein and Prague
Krista De Jonge
Ceremonial ‘Grey Areas’
On the Placing and Decoration of Semi-Public and Semi-Private Spaces in Burgundian-Habsburg Court Residences in the Low Countries (1450–1550)
Katherine Anne Wilson
Furnishing the Dukes with a Royal Reputation
The Use of Chambers and Chapels at the Burgundian Court
Nicole Riegel
Hospitality and Splendour
The Case of Schloss Neuburg am Inn, c.1530
Astrid Lang
Holbein’s Whitehall Mural for Henry VIII
Spacing a Place for the King
Alexandra Nancy Johnson
Mary Stuart’s Inner Chamber at Holyrood
An Embodiment of Power
Franciszek Skibiński
The Court of the Sun God Revisited
Interiors of the Royal Villa in Wilanów in their Cultural and Political Context
Ingrid Halászová-Štibraná
Aristocratic Interiors of the Kaisersaal Type from the Mid-seventeenth Century in the Kingdom of Hungary
A Case of Habsburg Imperial Iconography in the Lange Saal of the Pálffy Residence at Červený Kameň (Slovakia)
Ulrike Seeger
Vienna, Prague, Paris and Augsburg
The Provisioning of Interior Decoration in the Ludwigsburg Residence
Annette C. Cremer
The Model of a Régence Palace Interior
The Dollhouse Collection Mon Plaisir in Arnstadt/ Germany (1690-1750)
List of Contributors