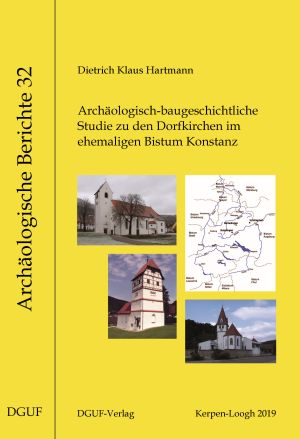 The eastern part of the former diocese of Konstanz / Constance represents a mostly rural area, where a large number of historical churches still exists. As some of them originally date back to the early middle ages, many of them were the subject of archaeological excavations during the last decades. This book, using the database of the Landesdenkmalamt Baden-Württemberg, aims at giving a complete overview of this research, most of which remained unpublished till today.

The main focus of this book is an attempt to compare the different forces influencing the early appearance of these churches. Especially the local existence of early-medieval settlements and the possible role of monastic property will be shown. As a result, it is possible to gain a comprehensive overview of the evolution of church architecture within a historical region.

The churches of St. Georg at Burladingen, St. Vitus at Schmiechen and St. Peter and Paul at Nusplingen, which constitute the basis of this work, will be presented in following volumes of this series.

After training as a precision mechanic, Dietrich Klaus Hartmann (b. 1936) studied electrical engineering at the University for Applied Sciences “Carl Friedrich Gauss Berlin”. Following 35 year working as a professional in the international computing industry in relation with ISO, he began his university studies in prehistory, archaeology, art history and geology at the university of Tübingen, graduating with his M.A. in 2006. During that time he volunteered at a number of historical societies. In 2017 he completed his doctoral thesis after studying at the universities of Basel and Münster. Since then he worked on several unpublished archaeological excavations within the responsibility of the Landesamt für Denkmalpflege Baden-Württemberg.