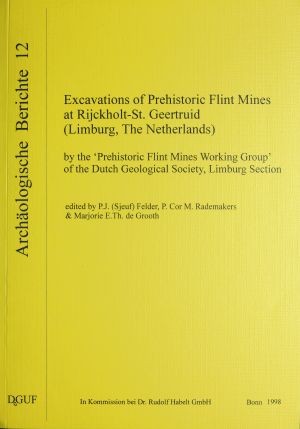 From 1964 to 1972, the "Prehistoric Flint Mines Working Group" of the Dutch Geological Society, Limburg Section, conducted excavations in the Neolithic flint mine of Rijckholt-St. Geetruid. The excavations based on a nearly 150 metres long tunnel driven through the Neolithic mining area. On both sides of the tunnel, the prehistoric galleries were followed over a length of ten metres. 75 square metres of shafts and 1.526 square metres of galleries were examined on a total area of 2.436 square metres.

However, the actual mining site is significantly larger: Underground mining stretched over an area of approximately 8 hectares. Flint was mined in an area of about 25 hectares while flake was located in an 25 hectare area. The archaeologists documented all discovered shafts and galleries in detail. Furthermore, they unearthed animal bones and snail shells as well as a human skull. The excavations provided more than 14.000 artefacts. Radiocarbon dating suggested an age between 3.970 and 3.700 BC. However, the local mining activities may have lasted until 3.400 or even 2.650 BC.

The present publication describes the applied excavation methods. Moreover, it attempts to reconstruct prehistoric mining techniques. The calculation of the absolute amount of flint (14-16 million kg of an 8 hectare mining area) and the number of shafts (about 2000) suggest that the soil still contains more than 400.000 stone artefacts.