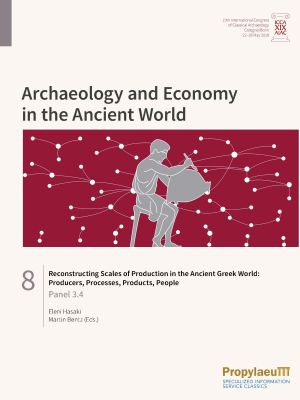 Titelei
Contents
Preface
Reconstructing Scales of Production in the Ancient Greek World: Producers, Processes, Products, People
Comparing the Labor Investment and Production of Early and Late Bronze Age Ceramic Roofing Tiles in Mainland Greece
Crossing Thresholds and Building States: Labor Investment, Tomb Construction, and Early State Formation in the Bronze Age Argolid
Relations among Workshops and Craftsmen in Protoattic Vase-painting: Limits and Perspectives in Quantifying the Production
Social Network Analysis and Connoisseurship in the Study of Athenian Potters’ Communities
Productivity of Athenian Vase-painters and Workshops
From Counting Pots to Counting People: Assessing the Scale of Athenian Pottery Production and Its Impact on Workshop Staff
Production and Consumption of Ceramics at Selinous: A Quantitative Approach
The Economy of the Ancient Pavements
Commentary
Total

Scholars have adopted an array of approaches, both traditional and experimental, to approximate the scale of craft production, which has always been central to the study of ancient economies. This panel examines these new methods, for estimating the workshop crew size, the workshop physical space, the time requirements for the chaîne opératoire for each product, the needs of the population for different goods, or the percentage of ancient products surviving to this day. These new approaches, some borrowed from related disciplines, should help us overcome the paucity of archaeological evidence. By employing social network analysis, individual worker’s output, architectural energetics, and production-consumption ratios, we aim to improve our understanding of the scale of craft production in the ancient Greek world, both in the Greek mainland and in the Greek colonies in Sicily. Archaeologists and ancient economists are using new approaches to study the ancient economy at a micro-level, taking into consideration several variables, such as raw material procurement, labor investment, cross-craft dependencies, apprenticeship periods, and product demand, to name a few. From Prehistoric to Classical Greece and Italy, the industries covered are mostly ceramics-centered, such as pottery and tiles, but also pavement construction and funerary monumental architecture.

Eleni Hasaki is an Associate Professor of Anthropology and Classics at the University of Arizona. She is the co-director of the Laboratory for Traditional Technology at the School of Anthropology. Her scholarship focuses on craftspeople, their apprenticeship structures, social networks, technological choices, and workshop economics.

Martin Bentz is a Professor of Classical Archaeology at the University of Bonn. He is the director of the excavation project at the potter’s quarter in Selinous, Sicily.