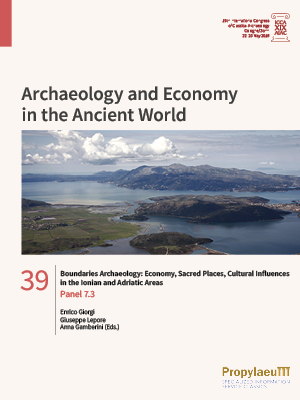 This work is licensed under a Creative Commons License 4.0 CC BY
.

Titelei
Contents
Preface
Boundaries Archaeology: Economy, Sacred Places, Cultural Influences in the Ionian and Adriatic Areas
Roman colonization, sanctuaries and cult in the middle-Adratic area between the 3rd and 2nd centuries BC
Monte Rinaldo. A Roman Sanctuary in the middle of Picenum
Cults, Navigation and Maritime Practices in the Middle and Southern Adriatic (6th–2nd century BC)
Sacred places, territorial economy and cultural identity in northern Epirus (Chaonia)
Marcus Antonius and the negotiatores of Dyrrhachium
Total

The territories of the Adriatic and the Ionian area were separated from each other both from a political and a cultural point of view. Because of this circumstance, they represent a suitable area for the study of commercial and cultural exchange. This meeting of cultures generated mutual influences and cultural osmosis in various ways and at different times, and was linked to different historical and geographical contexts, which nevertheless sometimes generated similar results. Recent archaeological research allows us to assume that sanctuaries and sacred places are suitable contexts in which these phenomena can be analysed, as they were places in which large amounts of people gathered and centres of cultural mediation that were involved in economic and political interests.

The contributions collected in this book consider these issues from different points of view and include studies on historiography, material culture and numismatics. The case studies of the northern Adriatic area are located on the western shore, and in particular in the area of the ager Gallicus and of Picenum, with a particular focus on the period that precedes and witnesses the structuring of the Roman domination of this territory (3rd / 2nd century BC). The case studies in the southern Adriatic and Ionian area focus on Apulia and the area of Illyria and Epirus between the Archaic era and the beginning of the Roman age (4thto 1st century BC).

Enrico Giorgi is Associate Professor in the Department of History and Cultures at the University of Bologna and teaches Archaeological Research Methodologies.

Giuseppe Lepore is Associate Professor in the Department of History and Cultures at the University of Bologna and teaches Classical Archaeology.

Anna Gamberini is Adjunct Professor in the Department of Cultural Heritage at the University of Bologna and teaches Archaeology of Roman Provinces.