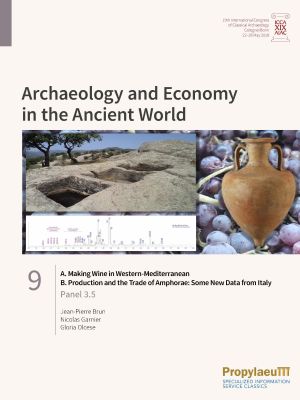 Brun, Jean-Pierre, Garnier, Nicolas and Olcese, Gloria (Eds.): A. Making Wine in Western-Mediterranean B. Production and the Trade of Amphorae: Some New Data from Italy: Panel 3.5, Heidelberg: Propylaeum, 2020 (Archaeology and Economy in the Ancient World – Proceedings of the 19th International Congress of Classical Archaeology, Cologne/Bonn 2018, Vol. 9). https://doi.org/10.11588/propylaeum.640

A. Making Wine in Western-Mediterranean B. Production and the Trade of Amphorae: Some New Data from Italy

The aim of this volume is to present new data and current multidisciplinary projects on viticulture in antiquity, on the production and circulation of wine, and on the containers that held the wine, involving archaeology, archaeometry, archaeobotany and molecular-archaeology.

The studies in this volume focus on Italy, and its relations to other areas (Spain, Malta), to deepen our knowledge of the transformations in the agricultural landscape. Another focus are wine production facilities, which have until now remained under-studied, such as rock cut vats.

The advancement of technical knowledge is gradually answering the old question of differentiating between wine and olive oil production facilities. We knew that the same presses were used for both products, but now, systematic floatation can turn up olive stones or grape seeds, and biochemical analyses in gas-chromatography or liquid-chromatography coupled with mass-spectrometry now provide very reliable results on the remains in vats.

The second part of the volume presents some new archaeological and archaeometric data related to the production and distribution of wine amphorae - coming from the Tyrrhenian coast of Italy, Spain and Africa - in Italy and the western Mediterranean, the study of which was also carried out using laboratory methods.

Jean-Pierre Brun studied history at the university of Paris IV Sorbonne and completed his doctorate at the university of Aix-Marseille. He directed the Centre Archéologique du Var from 1979-2000 and was then Director of the Centre Jean Bérard in Naples from 2000-2011. Since 2011 he has held the chair of Technology and Economy of the Ancient Mediterranean at the Collège de France in Paris. He has directed excavations since 1975, including the Roman port of Toulon; the Roman forts at El Zerqa, d’Al Mwayh, Bir Hammamat, Bir Seyala, Dawwi, Didymoi, Iovis, Xeron and Umm Balad in Egypt; the Greek city of Cumae, Italy; and a programme of research focussed on artisan production at Pompeii, Herculaneum and Saepinum.

Nicolas Garnier has studied chemistry in the Ecole Normale Supérieure in Paris, but also ancient history, archaeology, and Etruscology. His first thesis already focused on the chemistry of perfumes, the synthesis of triterpenoid markers of natural products, leading to a PhD in spectrochemistry at the Paris-VI University about the contents of amphorae. He then created his own private laboratory (LNG), allowing him to test and develop new protocols efficient for the good extraction, purification, and analysis of markers from a plethora of organic materials, dealing with phytochemistry, pharmacognosy, biogeochemistry, food chemistry.

As researcher, he is associated to the AOROC team from the ENS-Paris UMR CNRS 8546 and, for chemistry, to the MSAP laboratory, CNRS UR 3290. In the field of archaeology, he mainly works with institutional and private teams in France, in the Mediterranean basin from Spain to Arabia, on the Atlantic Coast from Portugal to Norway, and in Central Europe.

Gloria Olcese is Full Professor of Methodology in Archaeological Research at Università degli Studi di Milano. Her interests focus on the archaeology of production and trade, and multidisciplinary approaches integrating archaeology and archaeometry. She coordinated several large-scale research projects: in Ischia, with Prof. W.D. Heilmeyer, financed by the Thyssen-Stiftung (1999-2003) and the Italian Ministry’s FIRB project Immensa Aequora (2005-2011, www.immensaaequora.org)