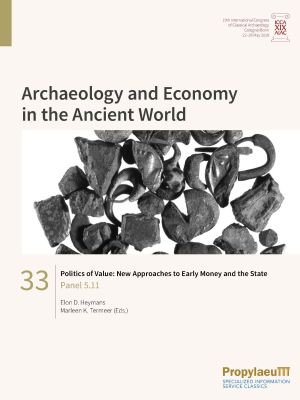 Titelei
Contents
Preface
Rethinking Early Money and the State
More than Just Coins: A Metrological Approach to Studying Coin Hoards from the Western Mediterranean c.550−480 BC
The Adoption of Coinage by Non-State Societies
Between Lumps and Coins
How Money Defined the Romans
Discussion
Total

Politics of Value: New Approaches to Early Money and the State

As one of the most enduring icons of economic life, money has been a common feature and central focus in complex societies from Antiquity to the present. It gained weight as a key feature of Mediterranean economies in the course of the first millennium BCE, mostly in the form of coinage. But money is more than just coin, and its significance is more pervasive than just to the strict sphere of “the economy”.
In the ancient Mediterranean, money and its rise to prominence have b een p redominantly a ssociated w ith t he s tate. B ut c an money only emerge under state authority? This volume questions the assumed relation between the spread of early forms of money and the state and draws attention to different ways in which money as an innovation could be anchored and socially embedded.

Elon D. Heymans holds a PhD from Tel Aviv University and is currently a postdoctoral researcher at Utrecht University. His research focuses on the early history of money in the eastern Mediterranean.

Marleen K. Termeer holds a PhD from the University of Groningen and is currently a postdoctoral researcher and lecturer at the University of Amsterdam. Her research interests include the introduction of coinage in the Roman world.