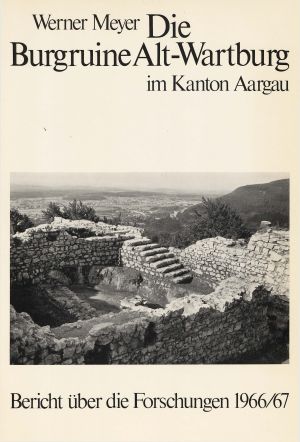 In 1966/67, the ruins of Alt-Wartburg above Olten were cleared of rubble and archaeologically examined. The terminus ante quem of the destruction, which is chronically mentioned several times for the year 1415, is interesting for the research. Finds and features indicate a settlement beginning in the 11th century, the preserved walls date from the 12th century, which was followed by an extension in the 2nd half of the 13th century; further structural changes took place in the 14th century until 1415, when the castle was conquered, plundered and destroyed by fire in the course of the conquests of Aargau by the Bernese. The spectrum of finds does not show the entire range of household goods of a medieval castle, since much disappeared during the looting in 1415 that could easily be carried away. All the more impressive was the series of stove tiles found, ranging from unglazed beaker tiles to cup tiles and medallion tiles with accessories such as cornice and wreath tiles. But even here the ravages of the conquerors were evident: practically no medallion is completely preserved, most of them have been smashed. The detailed presentation of the archaeological findings is followed by a chapter on the history of ownership and rule.