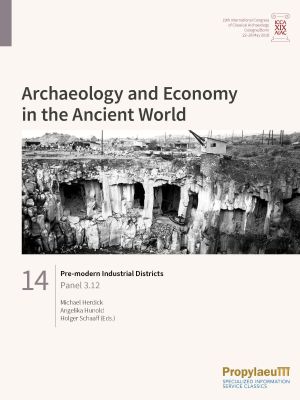 The ancient quarrying and mining district of the Eastern Eifel has been the subject of research by the Römisch-Germanisches Zentralmuseum (RGZM) in Mainz and Mayen since 1997. The products – primarily basalt lava millstones, tuffstone building material, and pottery – were extensively traded throughout much of Europe for many centuries.

An extensive research programme was launched to examine the wealth of evidence about the ancient stone industry in the region and its significance for the political establishment of Rome north of the Alps. The main subjects were the basalt and tuff stone industries as well as the Mayen vicus, the most important economic centre. Another subject is the pottery production, which is researched by material studies as well as by experimental archaeology. Other studies deal with the preconditions for the economic success, focussing on the infrastructure and the rural settlement conditions.

Being an industrial district of supraregional importance, the quarrying and mining district of the Eastern Eifel turned out an excellent case study for the investigation of pre-modern industrial districts in general, providing a model for the study of ancient industries: these need to be investigated with a long-term view and with a holistic approach, taking into account economic, social and settlement aspects.

Dr. Angelika Hunold is an archaeologist at the Department of Volcanology, Archaeology and history of Technonogly of the Römisch-Germanischen Zentralmuseums, Leibniz-Forschungsinstitut für Archäologie in Mainz und Mayen and has been studying the pre-Modern industrial areas of Mayen since 1997, focussing on the development of the settlement in Late Antiquity.

Dr. Holger Schaaff is an archaeologist and head of the Department of Volcanology, Archaeology and history of Technonogly of the Römisch-Germanischen Zentralmuseums, Leibniz-Forschungsinstitut für Archäologie in Mainz und Mayen and has been studying pre-Modern the industrial areas of Mayen since 1997, focussing on the Tuff quarrying.