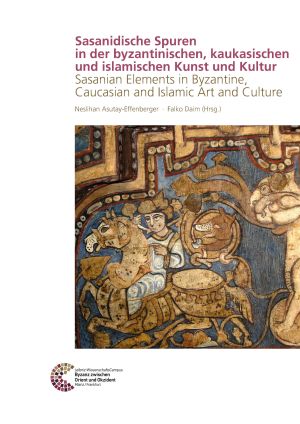 Titelei
Inhaltsverzeichnis
Vorwort
From one End of the (Post)Sasanian World to the Other. Mobility and Migration between the Caucasus, Central Asia and the Persian Gulf in the 4th to 9th Century CE
Assimilation and Adaptation of Foreign Elements in Late Sasanian Rock Reliefs at Taq-i Bustan
Eastern Elements in Umayyad Architecture: Audience Hall and Ceremonial Space in Residences
The Image of Rūm in Persian Epics: From Firdawsī to Niẓāmī
Architectural Decorations of Armenian Churches of the 7th and the 10th-11th Centuries and Their Presumably Sasanian Sources
Georgian Reception of Sasanian Art
Sasanidische Münzen im Kaukasusgebiet
Kalila wa-Dimna – Der Löwe als symbolische Form
Die Theophilos-Türme in den Blachernen und der Senmurw
»Sasanidischer« Baudekor in Byzanz? Der Fall der Polyeuktoskirche in Konstantinopel
Verwendete Siglen
Total

Sasanian Elements in Byzantine, Caucasian and Islamic Art and Culture

The empire of the Persian Sassanids (AD 224-651) extended over the area of modern-day Iran, Iraq, Azerbaijan, Pakistan and Afghanistan. Even the Caucasus regions lay under their political influence. Many elements of Sassanian art and culture can be found in neighbouring lands, such as the Byzantine Empire and Christian Caucasus, and, following the fall of the Sassanids, continued in those areas under Islamic control which had developed on their former territory.
In order to investigate the continuing role of the Sassanian Persians and their culture, in September 2017 an international conference was held in the Römisch-Germanisches Zentralmuseum in Mainz. The papers given by academics from various disciplines are published in the present volume.