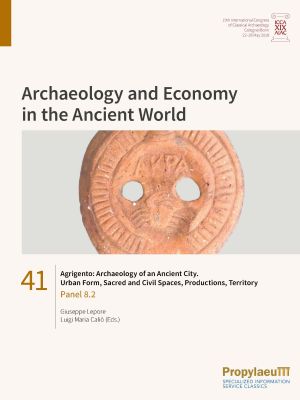 The archaeological research in Agrigento has undergone a new and important impulse thanks to a new collaboration between the Archaeological Park "Valley of the Temples" and many Italian and European universities, who have worked side by side on shared projects and excavations. This volume aims to be a synthesis of the most recent research carried out in the various sectors of the ancient city, but also a testimony of a correct way of proceeding, in which different universities and management, protection and research structures actively collaborate in the search for a common vision of such an important city of Antiquity as Agrigento, which, until a few years ago was isolated and little known in the research community, except for the famous Hill of the Temples. Agrigento now displays an unprecedented richness in archaeological research: the various aspects of the social, architectural and economic life of the ancient city now emerge with greater clarity, as well as the urban spaces, its sanctuaries, housing estates, production sites, but also the agricultural management of the chora and the extra-urban territory in an overall vision of the city which, although still partly incomplete, produces one of the few complex syntheses of the life of a city in ancient Sicily.

Giuseppe Lepore is professor of Classical Archaeology at the University of Bologna.
He is specialised in wall painting, urban planning, construction techniques and the "archaeology of death". He has also excavated in numerous sites in Italy and abroad (Egypt, Croatia, Albania).
He currently directs the Italian Archaeological Mission in Albania (Phoinike excavations) and the excavations in Agrigento.

Luigi Maria Caliò is professor of Classical Archaeology at the University of Catania.
He is specialised in collecting, ancient architecture and urban history. He has excavated in Saturo, Larino and Gortina and worked in Albania with the Polytechnic University of Bari. He currently works in Greece (Gortina di Creta) and Italy (Agrigento).