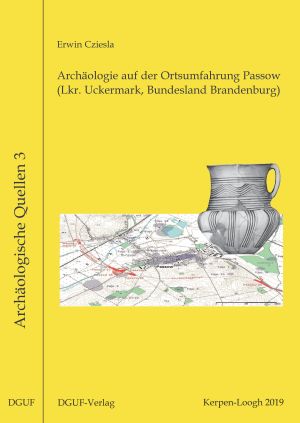 In order to quicken the travel times between Schwedt/Oder and Prenzlau (northeastern Germany), as well as relieving the congestion in the little community of Passow, a ring road was planned. Since the project is situated in an extremely favorable topographical settlement area, all ground operations were placed under cultural heritage orders. Between November 2003 and December 2005, an approximately 5.2 km long route was prospected, and according to these results, an area of 70.000 sqm with 1350 archaeological features in six spatially separated areas (named Passow 6, 20, 26, 25, 27 and Wendemark 10) on both sides of the river Welse were documented.

The oldest finds are Late Mesolithic scattered finds embedded in Bronze Age features. Followed by Neolithic ceramic concentrations and some single burials and pot-depositions. But most of the features of the area Passow 27 & 6 are datable to the horizon from Late Bronze Age into the Early Iron Age, in which two spatial separate areas are clearly separated from each other. On the one hand, there are pit features which contained copious ceramic sherds and special finds, such as remains of mud-turtles, an isolated human skull without mandible or the complete skeleton of a young female, whose shinbone was discovered in a neighboring pit. On the other hand, there is a type of feature consisting of linear and parallel ordered rows of pits filled with stones. The examination of four exemplary examined “Steinplatzgruben” proved that the stones were not shattered in these pits but were only placed into the pits once they had been used elsewhere. These features, together with the Neolithic ceramic depots, graves (also from several surrounding sites) can be used to reconstruct a ritualistic landscape which existed since 4000 B.C. and probably was important into the Roman Iron Age period, as shown by features, finds and a dated well. Additional features from the Roman Iron Age period come from Wendemark 10 on the left side of the river Welse as from the very extensive site Passow 25, southeast of Passow. The early Slavic features that occupy a completely different area on the site Passow 27 did no longer belong to the reconstructed ritualistic landscape but reveal details of a rural settlement.

Erwin Cziesla, born in 1955, finished his Master (1980) and Ph.D. (1989) at the University of Cologne, and since 1993 he is chief executive officer of the archaeological company “Wurzel Archäologie und Umwelttechnik“ with residence at Stahnsdorf near Berlin. Previously he was coordinator for the planning of the new Neanderthal-Museum (1979) and member of the expedition-team project “Settlement history of Eastern Sahara” (1980-1992), financed by German Research Foundation. His scientific topics are methodological aspect in Stone Age Archaeology, research into the Mesolithic as well as research into the nature of Mesolithic-Neolithic relationship. In 1987 he organized the first international Congress concerning the refitting of stone artefacts (“The Big Puzzle”) and he was the first who identified bones from Bonn-Oberkassel as one of the oldest domesticated dogs in Europe. He is one of the charters of the German “Mesolithic working group”. Up to now he published nearly 200 scientific articles, especially eight monographs.