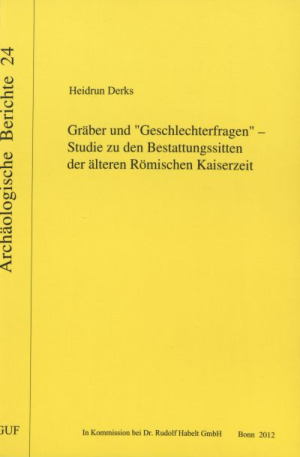 Cemetery for males, cemetery for females or “optical” illusion? Male or female? Cultural phenomenon or a fallacy caused by source material? Since the long 19th century these questions go hand in hand with research on graves and graveyards of the early Roman Imperial period between the Elbe and the Oder.

The study at hand summarizes the course of previous discussions and delivers an extensive examination of this controversial issue, that has been debated over for about 150 years, by analyzing over 7.000 single findings from over 300 sites. The study furthermore brings potential interpretations and explanatory models into focus and thus moves beyond the realm of archaeological research.

For the first time a comprehensive comparative evaluation of ethnological studies about the relevance of gender in funeral rites is being presented. The study gives insight on the diversity of arrangements and meanings of gender specific funeral rites and on the “interaction” between life and death expressed by the rites.

Reconsidering and linking back to the early Roman Empire it becomes clear that conceptions of cultural “gender” affected funeral rites at that time considerably, but they by no means determined them single-handedly. Despite the sometimes vague and diffuse source material, it can be argued that a complex interplay between political, economic and social factors needs to be considered in order to interpret and explain the regional diversity as well as the historical changes observed concerning rites for grave goods.

At the same time, however, there is some evidence that the gender concept gathered from the funeral rites possibly was influenced by external factors – threats, elite formation, increase in “prosperity” – and was subject to considerable changes in the course of the early Roman Imperial period.