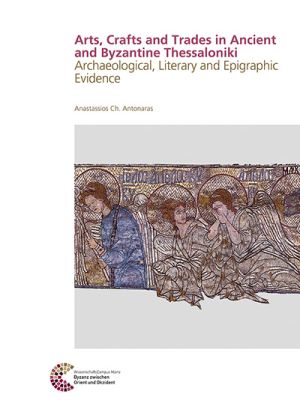 Arts, Crafts and Trades in Ancient and Byzantine Thessaloniki

For the first time, the arts and crafts of Thessaloniki, once the second largest city in the Byzantine Empire after Constantinople, are examined thoroughly through archaeological remains, historical sources and epigraphic records.

More than 80 years of archaeological research and a life-time of personal research that covers 112 excavations, reveals at least 16 artisanal trades in detail. The book is organised chronologically with overviews of the political history and topography of Thessaloniki throughout its nineteen-centuries-long history. With an illustrated catalogue of each site and distribution maps, this work reveals relatively unknown aspects of life in Antiquity, the Early Christian period and Byzantium.

There was a new edition of Anastassios Ch. Antonaras: Arts, Crafts and Trades in Ancient and Byzantine Thessaloniki Archaeological, Literary and Epigraphic Evidence 2019

"Thessaloniki is often referred to as the “second city of the Byzantine Empire,” because it was surpassed in size and wealth only by Constantinople. Although its preserved material evidence is, likewise, exceeded only by that of the Empire’s capital, this paramount urban center continues to be largely underrepresented in international scholarship."

"Empiricism is sometimes seen as a dirty word, yet without the bringing together of material evidence, theory can be so much hot air. What Anastassios Antonaras has produced here is essentially an empirical text, yet it is one which should be of major interest to anyone interested in Byzantine art, Byzantine Thessaloniki, the development of Byzantine cities more widely, or issues around trade and manufacture, from tanneries to mosaics, ceramic production to perfumery. "

Liz James, in The Medieval Review