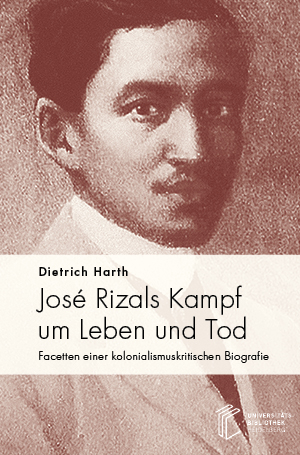 José Rizal (1861-1896) studied medicine in Manila and Madrid, completed a special training as an ophthalmologist in Paris, Heidelberg and Berlin, wrote poems and socially critical novels, and attacked with a pointed pen the arbitrary colonial rule of the Spaniards over his Filipino-Tagalog homeland. Although he was a partisan of non-violent decolonization, he was sentenced to death by a Spanish military tribunal for incitement to riot and executed. Dietrich Harth’s biography approaches the life and work of the Filipino intellectual in four steps. In the first part, he sums up the most important phases of the more than 300 years of colonial rule of the Spanish crown and outlines the changes that followed the American regime, with particular emphasis on the idolization of Rizal as a national hero. The second part chronicles the history of the family background, the education and the persecution of Rizal, while the third part is devoted to his diverse, scholarly inspired research interests, which he treated in numerous essays, and not least to his closely related polemics against the colonial regime. The last part deals with the politically as well as literary remarkable novels Noli me tángere and El Filibusterismo, which established Rizal's fame in the Southeast Asian world and which is part of government-ordered reading in all educational institutions in the Philippines. The present biography is the first comprehensive presentation in German that seeks to approach Rizal's way of thinking in a direct way, i.e. by translating it from Filipino Spanish into German.