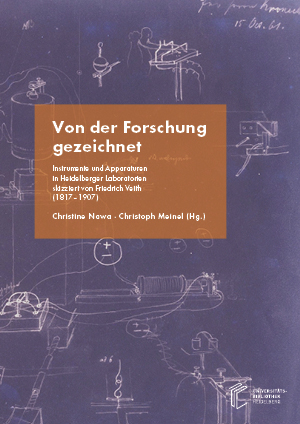 In the heyday of the University of Heidelberg in the 19th century luminaries such as the chemist Robert Bunsen, the physicist Gustav Kirchhoff and the physiologist Hermann Helmholtz coined the University’s fame. They had their scientific instruments and experimental setups depicted by the University’s drawing teacher Friedrich Veith (1817–1907). A portfolio of some 50 of his drawings from 1856 to 1891forms a unique source for the experimental culture of that period. It also testifies to the importance of visual communication in science and to the role of the many ‘invisible hands’ on which research depends.

Christine Nawa is a historian of the physical sciences. From 2005 to 2008 she received a research fellowship from the Stadt Heidelberg Stiftung. After two years as Fellow at the Chemical Heritage Foundation in Philadelphia she worked as trainee at Tübingen’s University Museum. Since 2015 she is Collections Manager in Göttingen’s University’s Centre for Collection Development.

Christoph Meinel is a historian of science with focus on the early modern period and on the history of chemistry. From 1990 to 2015 he held the chair for history of science at the University of Regensburg.