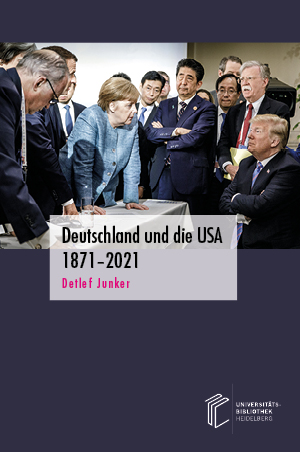 Deutschland und die USA 1871-2021 (Germany and the United States 1871–2021) is the first comprehensive look at 150 years of German-American relations. It traces this dramatic story in all its complexity from the founding of the German nation state in 1871 to World War I, the Weimar Republic, Hitler and Nazi Germany, the Cold War and its demise, and the revolution of 9/11. The book also scrutinizes the presidencies of George W. Bush, Barack Obama, and Donald Trump on one side of the Atlantic, as well as the tenure of the German Chancellor Angela Merkel on the other side.

Prof. Dr. Dr. h.c. Detlef Junker, Distinguished Senior Professor and Founding Director Emeritus Heidelberg Center for American Studies (HCA) Universität Heidelberg. The Author taught modern history at the Heidelberg University from 1975 to 1994 and held the Curt Engelhorn Chair for American History from 1999-2004. From 1994 to 1999, Professor Junker served as the Director of the German Historical Institute (GHI) in Washington, D.C. The foci of his research include the history of U.S. foreign policy and German-American relations, 20th century German history, and theory of historical scholarship. Prior to his studies, he underwent journalistic training to become an editor. He studied history, political science, philosophy and German studies in Kiel and Innsbruck. From 1970-71 he was a postdoctoral fellow at Yale University.