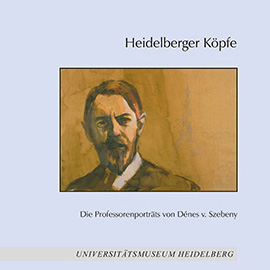 The first edition was published by the University Museum of Heidelberg in 2005.

On the occasion of the University of Heidelberg’s anniversary in 1986, the artist and graphic designer Dénes v. Szebeny, born in Hungary and resident in Heidelberg since 1973, created an extensive series of drawn portraits of Heidelberg University professors. The series is laid in the 19th and early 20th century, the earliest being that of the natural law philosopher Samuel von Pufendorf (1661-1668), the youngest depicting the physicist Walther Bothe (1932-1957).