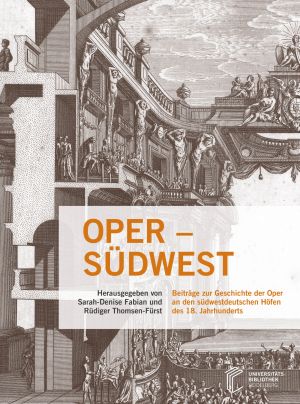 For Silke Leopold on the occasion of her 70th birthday presented by the staff of the research centre »History of Southwest German Court Music« of the Heidelberg Academy of Sciences.

»Opera – Southwest« illuminates aspects of music theatre, especially at the Southwest German courts of the eighteenth century. New possibilities for the reconstruction of the opera repertoire in Rastatt, Baron Sigismund von Rumling's Musiktheater in Zweibrücken and the special final arrangement of Niccolò Jommellis Didone abbandonata at the Württemberg court, and also the composition process of Johann Adolph Hasse's Dresden operas will be discussed. In addition, three contributions are dedicated to Franz Danzi and his discourse with Wolfgang Amadeus Mozart.

Sarah-Denise Fabian studied musicology, German literature and philosophy in Heidelberg and Cremona. In 2014 she received her doctorate with a thesis on wit and humour in the overture suites of Georg Philipp Telemann. Since 2015 she has worked as a research assistant at the Research Centre for the History of Southwest German Court Music in the 18th Century of the Heidelberg Academy of Sciences.

Rüdiger Thomsen-Fürst studied Historical and Systematic Musicology and Modern German Literature at the University of Hamburg. In 1994 he received his doctorate with a thesis on the music history of Rastatt in the 18th century. Since 1996 he has worked as a research assistant in the research departments History of the Mannheim Hofkapelle (1996-2006) and Southwest German Court Music (since 2006) of the Heidelberg Academy of Sciences.