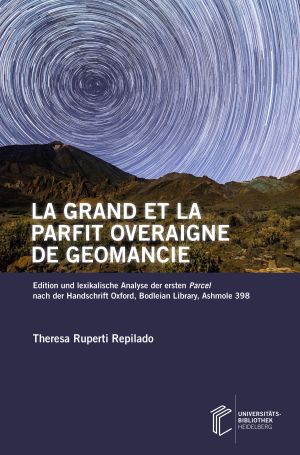 In the Middle Ages, geomancy was an enormously popular divinatory technique whose similarity to astronomy made it a science in its own right.

One of the most important authors of a medieval geomancy is the Flemish cleric William of Moerbeke. The geomantic treatise that he composed most likely in 1269 was translated into French in the middle of the 14th century. The present work includes a critical text edition and a comprehensive lexical analysis of the first part of the Old French translation. Furthermore, additional background information concerning the text, its language and its subject matter are included to provide a deeper understanding of the text.

Theresa Ruperti Repilado studied French and English at the University of Freiburg (Germany) before doing her doctorate. From 2013 to 2017 she worked as an editor for the Dictionnaire de l’Ancien Français in Heidelberg, focussing on medieval geomancy.