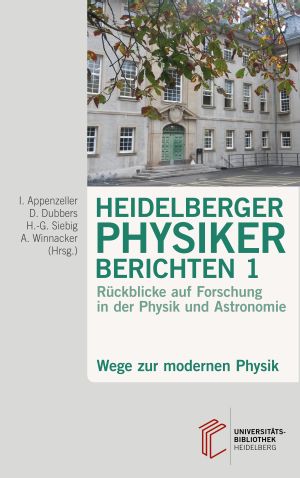 In this series of, as presently envisaged, four volumes, former members of the renowned Faculty of Physics and Astronomy of the University of Heidelberg report on their scientific work and the history of their field. The individual contributions are based on autobiographic talks presented between 1991 and 2017. Much of  the vividness of oral presentations and the authenticity of personal recollections has been preserved in these texts.

In captivating reports the authors describe their scientific lives and their paths to discoveries,  embedded in an often eventful life and a turbulent historic environment. Although the individual careers may differ considerably, the reader will discover many common traits. He will learn fist-hand how science happened, and still works, even in today's  epoch of interdisciplinary research and large international projects. The present first volume of this series includes talks centered around the history of physics around the middle of the twentieth century. The following volumes will report on the more recent developments.