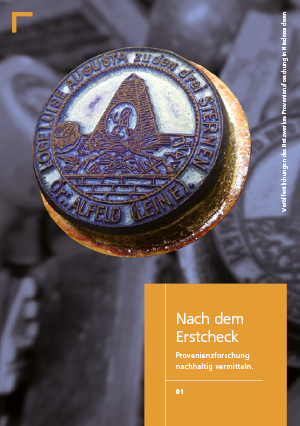 This article presents the results of a two-year provenance research project in four museums for local history in Southern Lower Saxony by means of exemplary objects and their provenance. These objects from museums in Alfeld, Duderstadt, Einbeck, and Hann. Münden are red-flagging a number of categories which are critical to provenance research that focuses on the era of National Socialism: Masonic lodges, socialist workers’ clubs, Jewish contexts (Judaica, Jewish individuals and institutions, Jewish owned art shops) and anonymous auction sales. In addition, ethnographica and human remains from colonial contexts were found and wait for their further investigation. Next to provenance research’s central aim of clarifying the proprietary status of certain objects and, when indicated, their restitution, the project considered the widely arrayed collections as a kind of (con)text: both as source for local history during the National Socialist period and the debated objects. Lacking sources were compensated, where possible, by extended contextual research. In addition, the collections comprise sensitive objects which were not necessarily acquired under unlawful circumstances but nevertheless are raising questions concerning their handling and interpretation. As an example, in the Museum of Einbeck stands a strand of hair of a Jewish girl which later perished in the Holocaust. Both the results of provenance research and its specific perspective on the museums’ collections are additional resources and an impulse for the museums‘ further educational efforts.