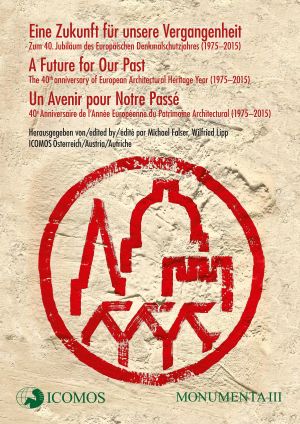 A Future for Our Past

Under the motto A Future for Our Past, the European Architectural Heritage Year of 1975 was the most important and successful campaign of its time for the preservation and valorisation of architectural heritage in Europe. With its recognition of the importance of urbanistic ensembles, of the plurality within the categories of historic monuments, of citizens’ engagement, and ﬁnally, of legal and administrative measures for monument protection, this European campaign had a sustainable impact. Its programmatic approaches and conceptual ideas are of high importance for the present, and motivate new interpretations for the future. With more than 40 contributions this publication is the ﬁrst comprehensive appraisal of 1975 European Architectural Heritage Year for its 40th anniversary in 2015.

Michael Falser studied architecture and art history in Vienna, Paris, PhD about the history of historic preservation in Germany (TU Berlin), Habilitation thesis on the Cambodian temple of Angkor Wat as transcultural heritage. With a focus on cultural heritage studies and modern architectural history, he was project leader at the Chair of Global Art History at the Cluster of Excellence ‘Asia and Europe in a Global Context’ at Heidelberg University. Visiting Professorships in Vienna, Kyoto, Bordeaux and Paris, member of ICOMOS International.

Wilfried Lipp studied architecture, ethnology and art history and graduated in 1970 in Salzburg. Habilitation 1986 at the Salzburg University on the development of monument awareness by the civil society. Professional career in the federal monument preservation of Austria, 1992-2010 head of the Conservation Department of Upper Austria. Professor at the universities at Linz and Salzburg. President of ICOMOS Austria in 2002, Vice-President of ICOMOS International for Europe from 2008-2011. President of the ICOMOS ISC on Theory since 2011.