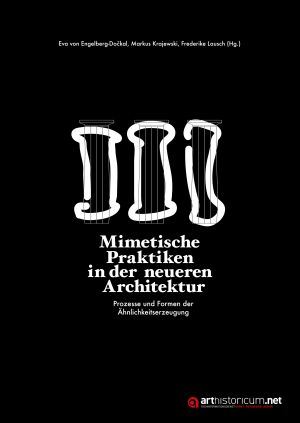 Quotation, copy, montage, reconstruction, imitation and mimicry are typical approaches in the architect's daily routine. Until today, the paradigm of originality is still predominant and clouding the view on mimetic phenomena. In 2016, the convention "Resemblance: Processes and Forms" was held at the library of the Werner Oechslin foundation in Einsiedeln. This volume is a collection of twelve papers contributed to the convention and two additional articles by the editors. The focus was set on researching the methods of generating similarity in recent architecture and was organised by the projects encompassed by the DFG-SNF-research group "Media and Mimesis."

Dr. phil. habil. Eva von Engelberg-Dočkal, arthistorian, currently research assistent in the DFG research-group Media and Mimesis, Bauhaus-Universität Weimar, with a research project on contemporary historicizing architecture. Research on the history of architecture from the 18th century until today with a focus on Germany, the Netherlands and Denmark. Doctoral thesis on the Dutch architect J. J. P. Oud, professional dissertation on the Danish classicism in the former duchies Schleswig and Holstein, discussing the possibility of a political style.

Markus Krajewski, Professor of Media Studies at the University of Basel, Switzerland. Author of Paper Machines. About Cards & Catalogs, 1548–1929, The MIT Press, 2011, The Servant. Media History of a Figure between King and Client, Yale University Press, 2017, and of World Projects. Global Information Before WWI, University of Minnesota Press, 2014. Bauformen des Gewissens. Über Fassaden deutscher Nachkriegsarchitektur, Stuttgart, 2016. Current research projects include the problem of planned obsolescence, media and architecture, epistemology of the peripheral, and the history of exactitude in scholarly and scientific contexts. For further information see: gtm.mewi.unibas.ch.

M. Sc. Frederike Lausch studied Architecture at the Bauhaus-University in Weimar/Germany from 2007 to 2014 including a study abroad at the Middle-East-Technical-University in Ankara/Turkey. Currently she is working as a research assistant at the Art History Department of the Goethe-University in Frankfurt am Main. In the scope the DFG-research group on “Media and Mimesis” her PhD research inquires on translation processes between philosophy and architecture. In 2015 she published her Master’s thesis on biographies of architects from the former German Democratic Republic.